Phenology: Tracking Nature Through the Seasons

Phenology is the study of annual events in nature that are influenced by seasonal changes. Peak apple blossom, sandhill crane migration return, and the start of songbirds’ mating calls are a few of the many thousands of cycles (phenological events) happening all around us, every year. For scientists, shifts in the cycles over time reveals changes in our regional and global climate. For Aldo Leopold, these events defined anticipation in his intimate relationship with nature. 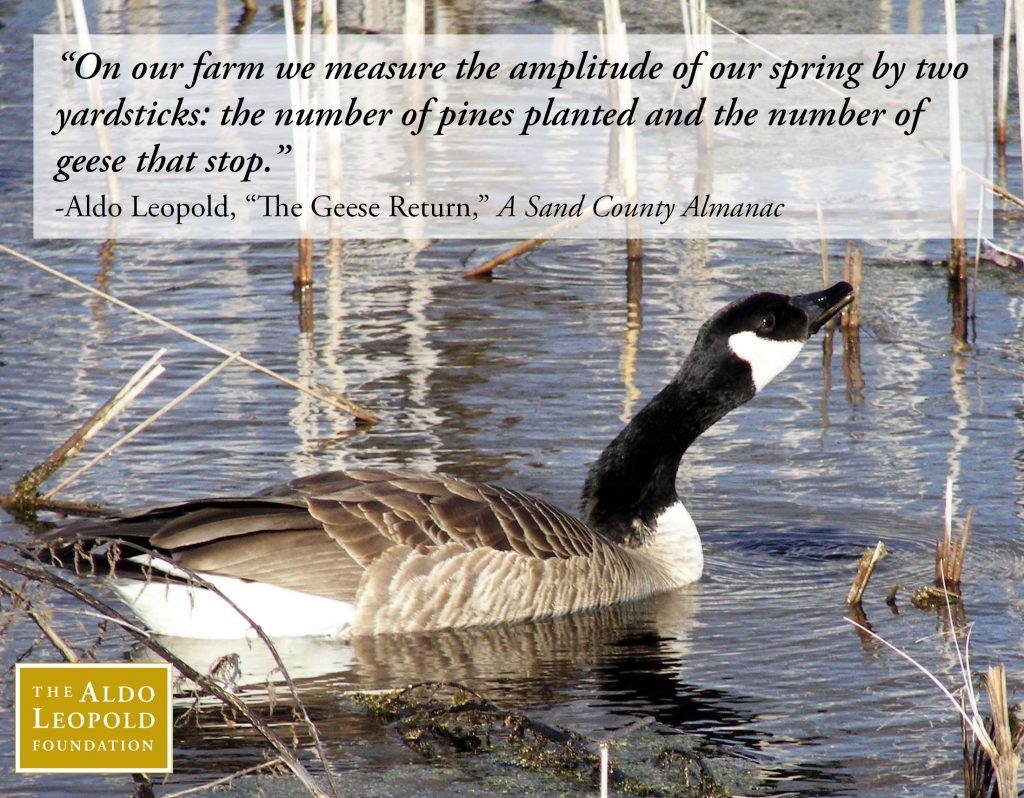 Leopold, regarded by many as the father of wildlife ecology, monitored and recorded phenological events in Sauk County, Wisconsin, beginning in 1936. Until his death in 1948, the Leopold family recorded events around their famous “Shack,” the place that inspired his classic book, A Sand County Almanac. In 1976, his daughter, Nina Leopold Bradley, returned to the area with her husband, Charlie, and continued the tradition. Following her passing in May 2011, her data set has been continued by the Aldo Leopold Foundation.

For over a decade, the Aldo Leopold Foundation has been a part of producing the annual Wisconsin Phenology calendar, which shares average observation dates for dozens of items based on Leopold’s and Nina’s data as well as that of other natural resource professionals around the state. Its roots are in the Leopold family’s passion for the study of phenology that has been carried on to this day. The monthly narratives in the 2016 edition of the Wisconsin Wildlife Phenology calendar highlighted the importance of bird habitat and its management. Declining bird populations often indicate a loss of breeding habitat. However, it might not be in the way you are thinking – prairie to parking lot, for example. Habitats naturally progress through their own cycles, converting from one habitat type to another. Prairies give way to shrub land and then, after a few years shrubs give way to trees; where once grassland birds thrived, now forest songbirds are found. Historically, forested habitats cycled back to prairie habitats through natural disturbance such as fire or grazing, which killed trees and shrubs. Today, disturbance is applied artificially through prescribed burning and grazing.

When protecting and managing habitat for birds, size matters. Big blocks of habitat are better than small ones. Large areas of habitat provide space for area-dependent species while having enough micro-site variation to favor tremendous and dynamic diversity. Connecting blocks of similar habitat is also important for protecting many bird species. Some birds will not cross natural barriers between blocks of preferred habitat, such as rows of trees separating two prairies. Such obstacles limit the ability of these birds to move on the landscape and expand their range.

An example of an ongoing management project focused on habitat for birds is the 12,000-acre Leopold-Pine Island Important Bird Area (IBA) which provides breeding habitat for over 100 bird species that depend on the Wisconsin River floodplain and adjacent uplands. The area is cooperatively managed through a partnership between the Wisconsin Department of Natural Resources, the U.S. Fish and Wildlife Service, Riverside Farm and the Aldo Leopold Foundation. In order to promote quality habitat for a number of species, The Aldo Leopold Foundation conducted a timber harvest in the Leopold-Pine Island IBA to improve habitat for their priority bird species. The 167-acre harvest will increase the breeding potential redheaded woodpecker, blue-winged warbler, willow flycatcher, and black-billed cuckoo. Cutting trees opens the forest, promotes sun-loving oaks and hickories, and benefits native grasses and wildflowers – habitat where declining grassland birds can thrive. You can see this process in progress if you visit us here at the Leopold Center in Baraboo. The Leopold-Pine Island Important Bird Area is a mosaic of over 12,000 acres of land owned by public agencies, private non-profit organizations, and individual landowners. All the partners voluntarily work together to protect critical breeding habitat for over 100 species of birds.

We hope that tracking phenology will inspire you to find out what birds are nesting in your area, learn where land is being managed for bird habitat, and create better habitat for birds in your own backyard and community.

Follow along with the Wildlife Phenology Calendar, offering spectacular images and details on what to look for nearly every day of the year!