This is the second in a three-part series on sandhill cranes exploring their history in Wisconsin, ties to Aldo Leopold, biological behaviors, and contemporary matters.  (In case you missed it, you can read part one here.) The series first appeared in our Spring 2017 issue of The Leopold Outlook, entitled “Sandhill Crane Redux.” If you enjoy this article, become a member and get future issues of the magazine delivered to your mailbox!

An Era of Protection

Passage of the Migratory Bird Treaty Act was undoubtedly the critical action that averted the extirpation of Greater Sandhill Cranes in the Midwest. As protection of the Act began to come into full effect, cranes began a slow but steady recovery. Protection from hunting was the key since it was primarily overkill, rather than habitat loss, that had caused their decline. It all relates to the crane’s life history strategy that emphasizes longevity over reproduction. Since they don’t reach sexual maturity for several years (up to 4 years on average), raise at most one or two young per pair per year, and relatively few pairs actually succeed in raising any young, sandhill crane numbers can’t increase rapidly after suffering heavy losses. But the birds can live a long time, which gradually allows them to produce enough offspring to replace losses and increase the population size. Current confirmed and probable breeding locations of sandhill cranes in Wisconsin. The Leopold Shack, in Sauk County, is marked with a star. Map courtesy of the Wisconsin Breeding Bird Atlas.

Their recovery started slowly but gathered momentum after the mid-20th century. Counts during the second half of the century revealed that the great surge in crane numbers has occurred since the 1970s. Today, there are around 75,000 cranes in the upper Great Lakes region and over 15,000 in Wisconsin. As they recovered, sandhill cranes eventually returned to nest in wetlands near the Shack in the spring of 1969, and they have adopted the stretch of the Wisconsin River near the Shack as a traditional staging area in preparation for their fall migration.

The sand counties of central Wisconsin that sheltered the remnant crane population of Leopold’s time have remained a breeding hotspot for the species. From core areas like this, the steadily expanding population has spread out across the bird’s former range in the upper Midwest. It now occupies much of the available wetland breeding habitat.

Not only are sandhill cranes breeding in most of the wetlands in the sand counties, they are also now using islands and sandbars along the Wisconsin River near the Shack as a traditional staging area as they prepare to depart for their wintering areas. In Fall 2016, flocks that swelled to nearly 10,000 birds converged on the stretch of the river above and below the Shack. That’s a large proportion of the cranes that now nest in Wisconsin. When these birds leave, they migrate to wintering areas as near as southern Indiana and as far away as Florida.

What brings all these birds to the vicinity of Leopold’s Shack? After their breeding season, sandhill cranes follow a predictable pattern as they prepare to migrate. My student, the late Scott Melvin, and I described this pattern after studying sandhill crane migration 35 years ago. In late summer, breeding pairs and their offspring start losing their territorial defensiveness and begin to spend time foraging with other nearby family groups and non-breeders before returning to their home territory each evening. Eventually, usually by late October, most sandhill cranes leave their summer habitat and converge on migration staging areas, which are typically within a single day’s flight from home. A sandhill crane sits on its nest. Photo courtesy of Steve S. Meyer.

These traditional staging areas, as the term implies, are used year after year by large numbers of cranes as they ready themselves for the upcoming, longer distance migration. Parent cranes lead their offspring to these places, and the young then return to them in subsequent years, maintaining the tradition through many generations. These regional staging areas always offer the co-occurrence of two essential requirements: an abundant source of food (usually waste grain available after the harvest) and nearby nocturnal roosting sites (often on an island) where the flocks of cranes feel safe from nighttime threats.

The daily routine for the assembled flocks consists of leaving the roost in the morning and heading out to nearby foraging areas, before returning to the roost at sunset. An evening roost can contain thousands of cranes packed into a particularly desirable area. Once they have congregated at a staging area, they will remain there throughout the fall until the food supply is no longer available and winter weather sets in, usually by early to mid-December.

The stretch of the Wisconsin River within the Leopold-Pine Island Important Bird Area (IBA) fits the bill perfectly. River islands and sandbars provide ideal nocturnal roosts, and nearby cornfields provide abundant waste grain. Furthermore, the surrounding region of central Wisconsin is the core area for breeding cranes in the state. The crane staging area was indeed one of the key justifications for the IBA’s creation.

As this autumnal gathering of thousands of cranes has grown, literally in our backyard, the Aldo Leopold Foundation recognized that it had an opportunity to share this impressive spectacle with the public and educate them about crane biology and conservation. For the past six years, I have been leading crane-watching field trips for friends of the Foundation, and the response has been overwhelmingly positive. 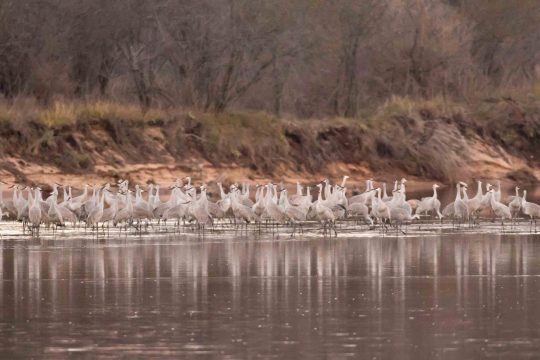 Sandhill cranes gather along the Wisconsin River behind the Leopold Shack. Photo courtesy of Robert Rolley.

Four or five weekends each year, tour groups gather first at the Leopold Center for a briefing. They then head out to blinds, erected by the staff, which allow groups to watch cranes from the south bank of the river just behind the Shack. We spend an hour or so watching cranes, lingering until after sunset when the cranes have settled in for the night. We are fortunate to be hosts to this spectacular ornithological show and delighted to be able to share this awe-inspiring display with others. Sheltered inside the blind, participants await the arrival of the cranes before dusk. Photo courtesy of Ed Pembleton.

After they leave their traditional staging area, the cranes move steadily toward wintering areas, pausing at a few stopover sites that are used year after year, such as Jasper-Pulaski Fish and Wildlife Area, as well as nontraditional stopovers that are used opportunistically when the birds are forced to interrupt their migration. Climate change is resulting in shorter, milder winters along the cranes’ migration route. In response, it seems that an increasing number of birds are leaving the breeding range later, spending the winter farther north, and returning to the breeding range earlier than has traditionally been the case. Once again, sandhill cranes are proving to be a remarkably adaptable species.

Leopold lamented the decline of sandhill cranes in Wisconsin, and he never imagined the day would come when the marvelous sights and sounds of flocks of thousands would be a regular autumnal phenomenon near his beloved Shack. Nonetheless, his poignant words in “Marshland Elegy” resonate as well today, when cranes are back among us, as they did when cranes seemed destined to disappear from Wisconsin:

“When we hear his call we hear no mere bird. We hear the trumpet in the orchestra of evolution. He is the symbol of our untamable past, of that incredible sweep of millennia which underlies and conditions the daily affairs of birds and men.”

But as we celebrate the success story of how the Migratory Bird Treaty Act allowed cranes to recover, a new issue has arisen: Should we allow Greater Sandhill Cranes from the Midwest to be hunted again after a century of treating them as a protected species? As several species have recovered from past overexploitation and the science of modern wildlife management demonstrates how wildlife populations can be harvested sustainably, the issue of opening hunting seasons resurfaces after a long hiatus. The transition from a once-rare species to a now-hunted and controlled species has already happened for other Midwestern species, including white-tailed deer, grey wolves, double-crested cormorants, giant Canada geese and wood ducks.

When wicked controversies such as this emerge, conservationists often ponder, “What would Aldo Leopold have thought about this issue?”  Continue reading the third and last installment of the series.

Witness the wildlife phenomenon of crane staging. Book your viewing experience at our Crane Congregations tours!