A Sense of Place

This place has taught me how to look and how to live, and so at last, to sing its poetry.

Today I speak to you of my own experience, my own deep attachment to a particular place. This attachment happened over time, with my family, on a sand farm along the Wisconsin River – land that was neither grand nor dramatic, but mundane, humbled, and degraded. It seems to have happened by slow accrual, like the growth of a coral reef. I dwell in this place and am finally apart of this place.

Recently I came across a splendid little book by Deborah Tall, who inspired me with the following statement: “How does land evoke our love? Surely not just driving through scenery or landscape  treating nature as a prop.”

This makes me think of a quip in The New Yorker not long ago, recording two secretaries in conversation after their drive-through vacations. It went something like this:

It seems all too often, we hurry through “scenery” without any attempt to engage the land. This may be the price we pay for our mobility and rootlessness.

On our sand farm along the Wisconsin River, I was able to get inside the scenery and the landscape. I became a living part of a living place. As we worked with family, friends, and neighbors, to restore health to the abused land, we were experiencing the slow sensitizing of people to land. We learned how to look, how to dwell and how to think about land. This was sick land but rich country for the growth of perception. 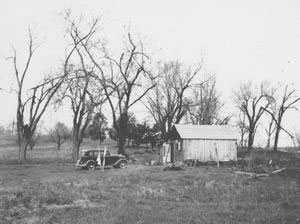 A view of the Shack in 1935 after Leopold acquired the property.

No one knew better than my father, Aldo Leopold, the joy of wild, unspoiled land. His love of wilderness was passionate and enduring. He had spent immense energy in protecting wilderness and trying to understand its dramatic complexity. He realized that wilderness was important in part so that we might retain the capacity to compare unspoiled land with lands more intensively altered by human economic activity. Leopold’s rationale for wilderness protection was not just recreational or scenic, but scientific, biological, political, economic and deeply aesthetic.

In the 1930s Aldo visited the Rio Gavilan in northern Mexico. This river still ran clear between mossy, tree-lined banks. Fires burned periodically without any apparent damage, and deer thrived in the midst of their natural predators, wolves and mountain lions. “It is here” Leopold reflected years later, “I first realized… that all my life I had seen only sick land … here was a biota still in perfect aboriginal health.” In “Song of the Gavilan” he wrote:

This song of the waters is audible to every ear, but there is other music in these hills, by no means audible to all. To hear even a few notes of it you must first live here for a long time, and you must know the speech of hills and rivers. Then on a still night, when the campfire is low and the Pleiades have climbed over rimrocks, sit quietly and listen for a wolf to howl and think hard of everything you have seen and tried to understand. Then you may hear it – a vast pulsing harmony – its score inscribed on a thousand hills, its notes the lives and deaths of plants and animals, its rhythms spanning the seconds and the centuries.

The ecological integrity of the Gavilan was put into perspective when my father visited the slick, clean forests of Germany in 1935 – spruce trees in straight lines, the forest floor devoid of vegetation. Litter piled up on the forest floor as a dry, sterile blanket which smothered all natural undergrowth, even moss.

Leopold came to realize what was lacking in the German forests was wildness – not wilderness per se – but a lack of biodiversity. He wrote of Germany,

The forest landscape is deprived of a certain exuberance which arises from a rich variety of plants fighting with each other for a place in the sun. It is almost as if the geological clock had been set back to those dim ages when there were only pines and ferns. I never realized before that the melodies of nature are music only when played against the undertones of evolutionary history. In the German forest one now hears only a dismal fugue!

And so it was an extraordinary event when Aldo Leopold purchased his Wisconsin farm. Here, the frontier story had come full circle from wilderness to farmland to waste. Here was the perfect metaphor for “sick land.”

In A Sand County Almanac, he wrote, “My own farm was selected for its lack of goodness and its lack of highway. In fact, my whole farm lies in the backwash of the River Progress.”

Gross understatement! The sandy soils, outwash from the glacier, had produced one or two crops of corn – perhaps a crop of buckwheat or rye before the soils were exhausted. Any timber had been cut. The corned-out fields were coming up in sand burrs and quack grass. Sand burrs in our socks were effective reminders.

There was little left to support a farm family. The previous owner had finally given up and moved to California, the farmhouse having burned to the ground. The only remaining structure was an old chicken coop, waist deep in chicken and cow manure. Fixing up the Shack.

What could be more of a challenge for a bunch of teenagers than repairing the chicken coop? Weekend after weekend, the Leopold family worked to make the chicken coop more habitable – cleaning out manure, constructing a fireplace, attaching a bunkhouse, a new roof, drilling a small sand-point well and many other items for comfort.

The “Shack” became a family enterprise to which each member contributed: cutting and splitting wood, building birdhouses for martins, screech owls and bluebirds.

In my father’s quiet way we finally were led to understand his direction: what did this land look like before white man took it away from the Indians. Reconstruction of the native landscape became our aim. We now realize this was one of the earliest attempts at ecological restoration. Nina Leopold planting a pine tree near the Shack.

From April to October scarcely a weekend went by that someone did not plant or transplant something – butterfly weed, tamarack, wahoo and oak, penstemon and puccoon. Spring vacation became the principal planting season. Each year we planted some 3,000 native pines on the land. We planted them with shovels so sharp they sang and hummed in our wrists as they sliced the earth. We planted a mosaic of conifers, hardwoods, and prairie to restore health to the land. In winter we banded resident birds. We recorded daily, weekly, seasonal events on the land – tracks of animals in the snow, arrival of migratory geese, courtship of woodcock, etc. Here in reality, Father’s statement rang true, “keeping records enhances the pleasure of the search and the chance of finding order and meaning in these events.”

It was our mother whose enthusiasm sustained the project. Mother worked as hard as anyone, planting, weeding, whatever the enterprise. She was “chief sawyer” as the gang cut good oak to cook our grub and warm our Shack. With Mother’s Spanish background, she taught us Spanish songs, and each evening the guitar concert filled the old Shack until weariness forced us to our bunks.

In years of drought, our struggling plantings did not survive. We learned that “sun, wind, and rain” and the thrust of life would truly determine the outcome of all our investment in the place. On the left, one of the Leopold children rests on the gate near Levee Road. On the right, Nina recreates the image in 1996 to document the transformation.

Here in the sand counties, Aldo Leopold initiated a different relationship with the land, at once more personal and more universal. From his own direct participation in the restoration of the land he was to come to a deeper appreciation of the ecological, ethical, and aesthetic understanding of land and at the same time he was finding new dimensions to his sense of place – so, too, did his family members, colleagues in this venture.

What happened involved the senses, the memory, and the history of family. It came from working on the land in all weathers, suffering from catastrophes, enjoying its mornings or evenings or hot moons; valuing it for the investment of labor and feelings.

By his own actions, my father instilled in his children a love and respect for the land community and its ecological functioning. I now read with new perspective my father’s statement:

Family weekends at the farm turned out to be a place where my father put these two concepts into practice – the relationship of our family members to each other and their relationship to this piece of land. New values were developing somewhere within us.

At the Shack, we all became participants in the drama of the land’s inner workings. In the very process of restoration – of planting, of successes and failures, of animals and birds responding to changes – we grew increasingly to appreciate and admire the interconnectedness of living systems. A view from the Leopold Shack across the prairie painted by Nina’s husband Charlie Bradley in 1974.

As we transformed the land, it transformed us. This must be how a sense of place is nurtured. My father once wrote that restoration can be a ritual of self-renewal. And so it was.

One of the principal achievements of A Sand County Almanac is the recasting of our notion of natural beauty, away from the conventionally “scenic” to the more subtle sense that comes with ecological and evolutionary awareness.

Through my father, my family, and this experience, I have learned to love this land. This place has taught me how to look and how to live, and so at last, to sing its poetry.

Did you enjoy this article? It appeared in our Fall 2017 issue of The Leopold Outlook. Become a member and get the magazine delivered to your mailbox! Read her full bio on our Leopold family page.